11 JanThe role of the international community in the Syrian conflict: Prospects for peace 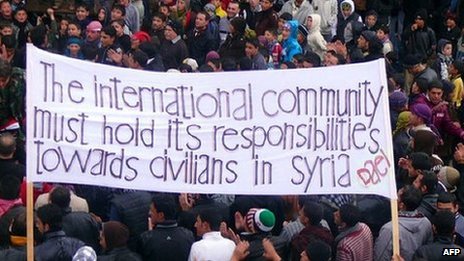 In the past few years the world is facing with new threats and challenges in terms of global security and stability. The situation is especially threatened with the overthrow of the regimes in North African states. This was the case in Libya, Egypt and, more recently, Syria. While Egypt and Libya established new governments, in Syria the status quo remains. The situation in all of these states is similar – fight against the regimes which had not been changed for decades led to a humanitarian crisis. But each of these states has a different story and characteristics which make it a unique case.

One of the central questions in the case of Syria is connected to the time frame of the conflict or more precisely: Why the conflict in Syria took so long? Why the regional actors cannot reach an agreement for an acceptable solution? The president Bashar Al Assad who leads the state more than 30 years and the opposition still cannot agree in order to provide a peaceful solution of the crisis. The question is: Why the conflict took this kind of direction?

The government is not interested in finding a solution of the crisis because in this way it would lose its power and the support from the neighboring countries. These countries, as an important regional factor in this context, are protecting their interests by fostering the relations with Syria and providing the regime of Assad with military help. Regarding the opposition, the situation is becoming worse with the fragmentation of the opposition itself and with the creation of the radical wing aims at overthrowing Assad’s regime by using force.

In this context, the international community tried to provide a long lasting solution of the conflict by pressing the opposite sides to accept the Geneva plan agreed in 2012 which calls for a cease – fire, formation of a transitional government and elections. But was this enough to stop the fire? Was it an adequate response for a crisis of this magnitude?

The international community offered little in a way of creating a strategy to bring the warring sides to the table. The prospects for a peaceful solution would have been much more realistic if the government of Assad refrained from using chemical weapon against the rebels from the opposition. Although the international community discussed the establishment of no-fly zones or limited strikes on Syrian military assets, this would have been costly and still would not be enough to ensure civilian safety. But what about the humanitarian crisis with which is faced not only Syria but also the neighboring countries whose borders are passed by thousands of people every day? The situation is of a big concern since a deepening humanitarian crisis will destabilize the region and terrorist groups like Al-Qaeda might find safe haven in Syria’s security vacuum.

The international community consisting of the most powerful states which play an important role on the international scene seems to have different points of view about the Syrian crisis. For example, the United States are interested to put an end to the war by using all of the necessary elements including economic and military sanctions in order to stop the conflict. This was especially the case in the time when the world found out that the regime of Assad had used a chemical weapon in order to defeat the rebels. On the other side the point of view of the other important player, Russia, isvery different. At the beginning of the conflict, the regime of Assad was supported by Russia, or more precisely Russia wanted to see the Assad government rule effectively. The time showed that this task was beyond its abilities.

This would mean that if the United States and Russia take a joint position in order to stop the war, Iran  would become the only major international supporter of the Assad government. In this set of circumstances the question is: What should the international community do in order to stop the conflict? When we talk about the international community it is inevitable to include NATO as an important international security player. NATO will have to use the mechanisms of its partnership policy channels in order to seek support and contributions for finding solution for the crisis in Syria. NATO will have to engage all the regional partners’ trough the network of partnerships, to foster the regional cooperation and to find a solution that would be acceptable for all.

The role of the international community is crucial in order to stop the conflict and to create conditions for sustainable peace. It will have to bring the warring sides to the table and, what is more important, to establish the conditions for long lasting peace and stability in the country and the region and that would require support in terms of building the peace on the ground with missions and joint efforts even when the war will be finished. The international community will have to make a serious effort to resolve the crisis because the consequences for the country are becoming more serious every day as thousands of displaced people are passing the borders of the neighboring countries causing a humanitarian crisis. On the other side the terrorists groups as Al – Qaeda and Hezbollah are improving their positions in this countries by using the state of conflict and in this way threaten the global security and stability.

What does Immanuel Wallerstein have to do with the Hunger Games?
Friends in Weakness, Foes in Strength: Turkey and Russia
The Sad Shahbanu: Fawzia Fuad of Egypt
The Matter with Occupy
peace, syria, Syrian crisis
This website uses cookies to improve your experience. We'll assume you're ok with this, but you can opt-out if you wish. Cookie settingsACCEPT
Privacy & Cookies Policy