02 FebUkraine at the crossroads between the EU and Russia 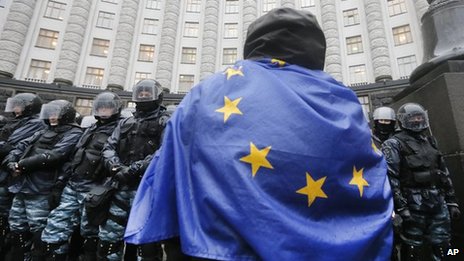 Twenty four years since the fall of the Berlin Wall it seems like the international political scene has not changed at all. The bipolar world proves its existence every day. These days we are witnesses of a new clash of interests between two powerful players: The European Union and Russia. The question is what was the reason for the European Union and Russia to sharpen their positions regarding Ukraine?

Russia and the EU are fighting a fierce battle to win over Ukraine at their side. Ukraine is one of the key countries in the sphere of Russian influence in which the West and Russia have enormous economic, energy and security interests. EU tries to approximate Ukraine to the Agreements for Association and  Free Trade. Russia, meanwhile, would like to see the country with 45 million people in its Customs Union with Belarus and Kazakhstan. Another attempt of the Russian policy towards Ukraine is the effort to integrate the country to the Collective Security Treaty Organization in which members are the countries of the wider neighborhood such as Belarus, Armenia, Kazakhstan, Kyrgyzstan and Tajikistan.

In an attempt to balance between the West and the East, Kiev in 2010 decided not to join any military alliance (NATO or the CSTO). However, according to some observers, the economic agreements that the EU offered to Ukraine apart from their economic dimension also imply security cooperation which might make them a Trojan horse of Western policies in the region.

The protests in Kiev are just continuation of the struggle for influence in Ukraine, led between the United States and Russia as well as continuation of the politics of bypassing Moscow and creating a strong cordon around its influence in the region. The question here is: If NATO and the EU want to expand and to include more countries, why they don’t invite Russia to be part of these associations? According to the Russian president Vladimir Putin ,Russia is not against the Association Agreement with the EU but needs to protect its market. Ukraine is a brotherly country of Russia and Moscow must help when the situation is difficult, in his opinion. The decision to reduce the price of the gas and to buy Ukrainian government bonds is due to the wish to help  a brotherly nation.

The financial problems that the country has were cruical for the decision of President Yanukovych not to sign the agreement with the European Union. Ukraine currently has a budget deficit of about 17 billion dollars of which 11 billion dollars represent the annual cost of purchasing Russian gas. Moreover, in an attempt to make Ukraine to change its position, Russia imposed restrictions on the trade between the two countries and threatened that they will strengthen the blockade if the agreements with Brussels passes. There is no doubt that first Kiev demanded billions of aid from the EU before the agreement is signed. Once the Union did not accept the Ukrainian demand, Kiev addressed Moscow for help.

EU and Russia have been competing for influence over Ukraine for years but at the end Moscow proved its willingness to pay a high price to keep the neighboring country in the sphere of Russian influence. Ukraine maybe is important for the politics of the European Union but also is very important for the geopolitical Russian influence. This was the main reason why Moscow was decided to spend  billions of dollars in order to distant Ukraine from the West. Of course this does not mean that EU has completely lost the battle for Ukraine because it is not clear whether Yanukovych could constantly win over the opposition, which has strong support from the EU.

The agreement between Yanukovych and Putin, which foresees a lower price of the Russian gas by 33 percent, highlights more problems in Ukraine. The first is that both sides wanted Ukraine in its block, but only Russia was willing to pay for it. Also, the agreement stressed the endurance of the Russian-Ukrainian relations, especially in times of crisis. More importantly, the agreement shows that when it comes to attracting Ukraine, the EU simply is not willing to invest as much resources as Russia.

The policy of non-intervention in Ukraine as well leaving the country on its own is extremely dangerous. Yanukovych and the opposition leaders are constantly exchanging mutual accusations and it would be difficult to resolve the crisis without interference from the outside to reach a solution. If EU and Russia want to prevent the spread of violence which might result in a civil war, they must act jointly.

Regarding the complex state of interests, the unclear idea about the goals of the politics of EU towards Ukraine as well as the foreign policy of Russia, it will be very difficult to offer a solution that will be acceptable for both sides. The example of Syria showed what can happen when the international community remains inactive because of their differences. In other words, the EU should finally threaten the regime of Yanukovych with sanctions because putting Ukraine in the state close to civil war is not in the interest of the West or Russia.

Are corporations humans?
Far from over: How peaceful will Southern Philippines be after the Zamboanga siege?
Post-Lautsi effect or populism: Church-state relationship and orthodoxism in the upcoming Romanian p...
Whose war is the war against Jihadists?
EU, european union, Russia, Ukraine
This website uses cookies to improve your experience. We'll assume you're ok with this, but you can opt-out if you wish. Cookie settingsACCEPT
Privacy & Cookies Policy