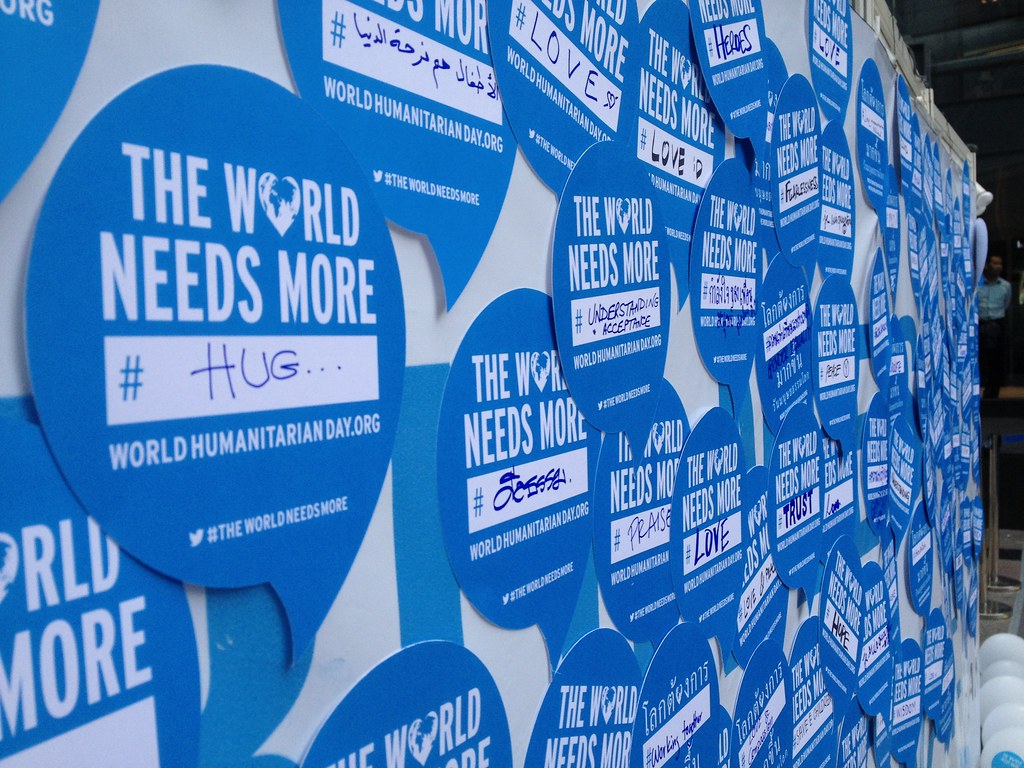 Syria, Iraq, Afghanistan, South Sudan, Somalia, Central African Republic; civil wars, armed conflicts, bloodshed, severe natural disasters, refugees, extreme poverty, hunger, disease. Working for the higher purposes of peace and human security in such conditions is certainly a dangerous occupation. In time, many brave men and women have lost their lives in the attempt of bringing assistance to those whose existence is shattered by war and disasters. August 19th is the day the international community pays its respect and appreciation for the continuous efforts of humanitarians around the world, promotes the spirit of people helping other people, praises the value of being human and caring about others’ existence.

What is “World Humanitarian Day”?

Celebrated for over a decade now on August 19th, the World Humanitarian Day is the time dedicated to recognizing those who face danger and adversity to help others, regardless of who they are and where they are, regardless of race, religion or politics. Its purpose is to increase public awareness about humanitarian assistance activities worldwide and to stress the importance of international cooperation in this regard. It also honors all humanitarian personnel who have worked in the promotion of the humanitarian cause, as well as those who have lost their lives in the cause of duty. The celebration date was designated as World Humanitarian Day by Resolution 63/139: “Strengthening of the coordination of emergency humanitarian assistance of the United Nations” adopted by the General Assembly as a commemoration of the terrorist bombing at the Canal Hotel in Baghdad (2003) in which 22 aid workers were killed, including Special Representative of the Secretary General, Sergio Viera de Mello.

The Canal Hotel bombings irreversibly changed the secure environment in which humanitarian workers should operate. The changes in the nature and actors of armed conflicts in the past decades have had a major influence on how humanitarian aid and its delivery is perceived as well. In the past, there was more respect for aid workers, for their distinctive signs in conflict areas. But the politicization of humanitarian aid and the growing idea that it is delivered exclusively by Western organizations and agencies has unfortunately resulted in an increase of targeted attacks on humanitarian personnel. Not only this is in violation of international norms and customs, but it also affects the quantity and quality of humanitarian assistance services in the field. What is even more tragic about these developments is that the majority of the humanitarian personnel engaged in helping the victims of wars and natural disasters are local volunteers, already affected by the appalling situations in their countries. To have the inner determination to help and do good, the selflessness of getting involved even in life endangering situations and to die because of political reasons and mistrust is maybe an even bigger tragedy. More than 800 aid workers worldwide have been assassinated, blown up by mines or abducted over the past decade.

But in spite of the more and more dangerous work environments, people still join the humanitarian cause and help with assistance and delivery in duty stations all over the world. The “World Humanitarian Day” official UN website shares the stories different aid workers and their motivation for continuing helping others in grave conditions:

“The most rewarding is the smile of the children we teach, the grateful look of the hungry we feed, the blessing of the sick or elderly we attend to…” (Balaza Simon, UNHCR Bangladesh)

“Realizing that I am contributing to the well-being of men, women and children, particularly those affected by emergencies and in need of immediate support, is the most rewarding part of my work.” (Faris Kasim, Save the Children Jordan)

“When I support our beneficiaries I can see their satisfaction. Their smiling faces are the best reward for me, and encourage me to do even more.” (Bithika Biswas, WFP Bangladesh)

World Humanitarian Day is therefore a tribute for the courage and dedication of all these people, a commemoration of all those who passed away trying to improve other people’s lives, a day for raising awareness and being grateful. It is also an immense paradox of our times: while there is still hope that some of us genuinely care about other humans and risk their lives in order to make the world a better place, it should also be an indication of our collective failure as a (international) society to prevent or resolve conflicts that would at least decrease the necessity of humanitarian workers. Maybe the world does not necessarily need more #HumanitarianHeroes to respond to conflict situations, but more of their empathy, generosity and selflessness.

Unchanged States
Do the geographical indications in the EU FTA put EU-Australia relations under scrutiny? By Eleni Kr...
A Critical Perspective on the Prosecution of ISIS-Fighters in Courts by Non-State Armed Groups. - Ja...
Ukraine caught in the crossfire: An analysis
human rights, World Humanitarian Day
This website uses cookies to improve your experience. We'll assume you're ok with this, but you can opt-out if you wish. Cookie settingsACCEPT
Privacy & Cookies Policy