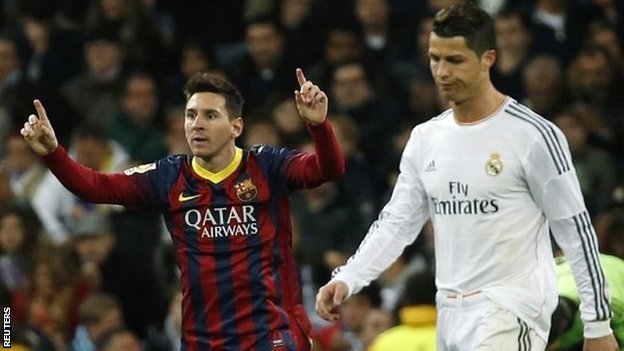 The first El Clásico of the La Liga season, probably the most watched league game of any sport, was won by Real Madrid, 3-1 despite FC Barcelona scoring the first goal of the match. This season’s game features the return of Luis Suarez after a four-month ban on playing football after his biting incident during the World Cup last June, as well as the World Cup Golden Ball winner James Rodriguez. The build-up to the match also features an in-form Cristiano Ronaldo, the reigning Ballon d’Or player, and Lionel Messi aiming to break the record of Telmo Zarra for the most number of goals scored in La Liga. With all its hype and color, little do sport fans know that this rivalry is grounded on a political struggle. Just like Barça, Catalunya, the region where FC Barcelona is based, who has scored with a planned “referendum” on their independence from Spain, the central government responded with its indefinite banning through the Constitutional Court of Spain, a temporary victory for “imperial” Madrid.

Aside from being two of the biggest and richest football clubs in Spain as well in Europe, El Clásico has deeper origins. FC Barcelona has been a foremost organization espousing Catalan identity since the 1930s, earning its motto més que un club (more than a club). It has been subject to intense pressure from the Francisco Franco regime during the Second Spanish Republic for its role in promoting Catalunya as a distinct region different from the Castile-based Republic, although such repression seized during the latter part of the period. On the other hand, connections between Franco and Real Madrid have been undeniable and regarded by Barça supporters as “The Establishment” club. This has happened under the background of dictatorial regimes of Miguel Primo de Rivera and Francisco Franco, where centralist policies were imposed as regional languages and identities were prohibited.

The call for Catalan independence has been very strong in recent years as the region experienced growth on its own. The Spanish economy has been laggard and the continued association of Catalunya to Spain does not help the region solve this problem, so the officials of the region say. The government of the region argues that despite its very high degree of autonomy given by the Spanish Constitution, several policies of the central government like those related to finance and taxes, are not working in favor of Catalunya. One of these includes the perceived situation that less is given back to their taxes than what they pay to the national government. After asking for fiscal independence, which was then refused by the central government, people have now asked for independence — inspired from the events that happened in Scotland.

The difference of Catalunya from the rest of Spain and its struggle for self-determination has been in popular culture for quite some time, and the biggest football rivalry is a good example of it. FC Barcelona has incorporated the senyera flag into its kit, and often is the senyera flag and crowd mosaic seen during El Clásicos at Camp Nou, Barça’s home ground. Barça has also been known to promote Catalan tourism without it associating to the Spanish tourism promotion particularly in China where there are a lot of fans of the team. This extent of cultural promotion might be seen as a diplomatic way to introduce Catalunya to the world.

As the Catalan referendum — although pushed through despite it being deemed “illegal” by the Constitutional Court — continues to be deemed unbinding by Madrid, Catalans will have to settle for different means to exercise their right to self-determination. Outside the efforts of Barça, massive protest rallies in Barcelona have been dominating its streets, with waving of the Catalan independence flag as its visible feature. Polònia — a comedy show about Catalan politics broadcasted by TV3, the regional public broadcaster in Catalunya — have a witty remark about the “illegal” referendum: the Constitutional Court of Spain was so predictable that it did not have to change its script for their succeeding episodes.

Independence movements across Europe have been on the rise in the advent of European economic struggles. Whether such actions were triggered by the economic situation remains to be debated upon. As Catalunya continue to struggle with its relations with Madrid, a definite solution to the problems of the region will remain in the air. One may expect more animosity between Catalunya and Madrid until an official referendum has been implemented and be decided by the Catalans. Sport fans will, of course, also expect more intense rivalry in the succeeding El Clásicos because of this political situation.

The Responsibility to Protect (R2P): Who should intervene?
The Effects of COVID-19 Lockdown on Crime and Security - Rita de Cássia Fransosi Farina
Ukraine at the crossroads between the EU and Russia
The European Union's absence from the European media
catalonia, catalunya, el clasico, fc barcelona, independence, messi, real madrid, ronaldo
This website uses cookies to improve your experience. We'll assume you're ok with this, but you can opt-out if you wish. Cookie settingsACCEPT
Privacy & Cookies Policy